The morality of paid freelance writing

It's perfectly legal to take someone else's written work, rewrite the same content in the same order in your own words, then publish it with your name on it instead of theirs, all without telling them.

It would be right to first ask the original author for permission to use their work, then when they refuse, to keep them informed on what you do with their work, and mention their name somewhere in your version of their work.

It feels less wrong when, in the process of rewriting someone else's work, you begin to suspect that the original author is as fake as you are.

The moral to be learned: there are a lot of opinions on the internet that should not be trusted, because someone paid the writers to have them.

This post for comments about dragons. That way they don't end up scattered on random posts. :)

For more about Dragon Cave dragons in general, check out my articles:
The Dragon Cave: A Review
How to get Dragon Cave eggs to hatch (and hatchlings to grow)
How to transfer a Dragcave dragon to a friend

Me: Juno. Shut up and listen.
Me: You're a 17 year old who knows nothing.
Me: When I explain things to you, try paying attention instead of talking.
Juno: I won't listen if you're going to be disrespectful towards me.
Me: you're not going to learn anything then
Me: if you want to learn things, you have to learn to listen first
Me: and talk last
Me: I shut down the conversation because she said "this is not a good time" and you refused to accept it.
Me: not because I didn't think your question was a worthwhile one.
Juno: I'm willing to listen and I can read what your saying. I'm also asking that you listen to what I say. And treat me as an equal. I think what your saying makes sense and I made a mistake. You're right about that.

I used to be that arrogant 17-year old.

Much of the problem with arrogant 17 year olds is that, by that point in their exceptionally long lives, they have experienced many different situations once. Therefore, they know everything there is to know about every one of those situations. What's so special about a thirty-four year old, then, who has merely lived twice as long and therefore seen each of those situations twice? What more is there to learn by living through the same situation a second time? Why is their wisdom given so much more weight?

Every situation has multiple sides. Right around 30, I started seeing the opposite sides of all the same situations, found myself on the opposite end of the same arguments. And so I've come to understand that I know nothing about anything. Including how to convey this to arrogant 17-year olds, who don't yet even know what they don't know.

Through the stormclouds a sunbeam came. 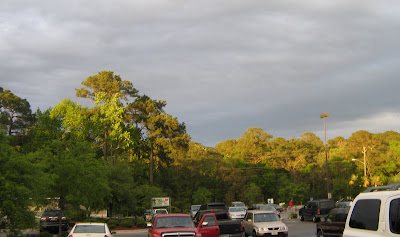 This was taken on a dark, cloudy day that was mostly filled with wind and rain. It went away about ten minutes later.

Early to bed and early to rise

Dominant western culture sees early rising as a virtue and staying up late as a vice. This seems to have strongly agricultural roots. Back when we lived in a predominantly agrarian society, work was mostly farmwork. A number of important farm animals are early risers, and so farmwork is best done early in the day and during daylight hours.

This, unfortunately, has led to a misconception that the best (and in some people's eyes, only) way to have a healthy, successful life is to get up in the morning, work during daylight hours, and go to bed in the evening. Modern society still expects everyone to do exactly that, even though many of us no longer live and work on farms. Standard school/work hours are between 8-9am and 4-5pm; standard mealtimes are 6-8am, noon, and 6-8pm. Society frowns upon those of us who deviate wildly from that schedule, and deems it acceptable to mock us.

But it wasn't always that way. There's a theory that people in different stages of the human life cycle are adapted to sleep during different parts of the day, such that someone in any group of humans will be awake and alert to surrounding dangers at all times. Teenagers and young adults, for example, tend to be awake all night and sleep all day, while older adults are awake during most of the day and evenings and sleep at night, and our wisest are most often awake in the early mornings with short naps during the day and much sleeping in the evenings. In my opinion it would be much healthier if we stopped insisting that everyone adhere to the exact same schedule - from very young to very old - and let people pick their own optimal cycles for productivity and sleep.

Some Observations on the Nature of Coding

Never explain the details of any coding problem to a True Coder. Their eyes will light up, their brain will start working out how to solve it, and next thing you know they've taken over doing the whole thing. Then things get all awkward if you don't actually use their solution, because all you were doing was thinking out loud or seeking some sympathy. It's better to just not even mention it (or, if they're helping with part of a larger problem, that the larger problem exists).

Never explain the details of any coding problem to a non-coder either. Their eyes will glaze over and they'll start looking for escape routes. Or they'll feel all helpless that they have no idea how to help you with what is obviously an exceptionally upsetting tribulation.

In short, coding woes are meant to be suffered alone*. As are coding triumphs meant to be enjoyed alone, because without any commiseration during the woe suffering, the triumphs won't make much sense to the outside observer. Coding is fundamentally a solitary pursuit.


*unless you're stuck in an IRC channel with me. In which case you might be subjected to random outbursts of High Geek that make no sense....

Retardedness in the airline industry

First of all, let's not even get into how totally retarded it is that in this day and age of electronic everything and high paranoia security, you're still insisting on using paper tickets and ONLY paper tickets. What are you, stuck in the fracking stone ages? Do I need to spell out all the ways that this makes no sense whatsoever?

1. Do you seriously still make people mail back their tickets through the postal service every time there is an itinerary change? Can we say horrendously inefficient and expensive?

3. I did not give you guys $1200 for the pieces of paper that the itinerary is printed on. I gave you the money in exchange for air travel. Which is confirmed in your fracking computer system. I can see it. You can see it. We all know it's there. We all know who's going to be doing the travelling. We all know that said travel has been paid for. I most fracking should not have to give you another 1200 fracking dollars to get more pieces of paper - and then be issued a refund (four! months!! later) when the original tickets are "unused."

How the frack are they going to get used? By the named passenger? Why the hell would they need TWO tickets for the SAME FLIGHTS? By a ticket thief? How are they going to get on a flight with stolen tickets? You don't think anyone would notice? Have you completely missed the security paranoia?

4. Oh yeah, sure. You're really going to refund my money (in four months!!) if those original tickets turn out unused. The fact that you declared bankruptcy last week just fills me with confidence on that promise.

5. What do you mean you keep no records whatsoever on when you mail out paper tickets? You have no idea when those tickets left your control and entered the postal system at all? How do we know that you even put them in the mail in the first place?

In short, I'm going to tell everyone I know that CheapTickets is a terrible travel agency, and Frontier Airlines is stuck in the stone ages (maybe that's why you guys went bankrupt!). Before this trip plan, I always used Travelocity (no problems ever!) and I'm going back to them from now on.

Dear GA License Plate #ACP-8408, a light brownish Toyota Camry who threw something white and fluttery out their passenger-side window while crossing the Roebling Bridge at 3:53pm today:

The world is not your trash can.


Signed,
The Saturn behind you

He who has the gold makes the rules.

Many animals already know how to use human devices and tools. They learn by watching what we do. Some of them can even read. They can't use the devices and tools themselves only because we designed them for human hands and human sizes.

If we allowed other animals to use our tools without requiring them to evolve technology on their own, what sorts of things might they say or do?

Refunds are best received as early as possible - like in January. Owed money, on the other hand, should be filed as late as possible without actually passing the deadline. I tend to mail mine in a week before April 15.

On a personal finances front: budget for money owed months in advance, but don't put tax refund money into any budgets until it has actually arrived.

Things I'm not doing but should:
1. Taxes. They're due in a week and a half.
2. Housework. I've been meaning to wash that pile of dirty pans on the stove for weeks, but since I also never get around to cooking anything (yay restaurants with carry-out!), it hasn't been urgent enough. Also, laundry is going to become an emergency by this weekend. This place could also use a good vacuum and the bathrooms are starting to go downhill again too.
3. Trip planning. As the designated logistics coordinator for my family for our trip to Hawaii in May, I should probably figure out what we're going to do once we're there. (Anyone who's been to Hawaii want to recommend some things? We'll be staying in Waikiki.)
4. Work. I'm not doing nothing at work, but there's massive amounts of procrastination going on there on a number of fronts. A visit to the boat crew to talk minute details at great length about sensor configurations from three to five years ago, for instance. Fortunately, most of the time I stall by doing other stuff that I'm also supposed to do.
5. Writing. I have three stories on the front burners and somehow never get around to working on any of them.
6. Blogging. Nothing has come to mind for days, and although there's a couple half-formed drafts I could finish, I've not been in the mood to finish them. Hence nearly a week of silence here.