The restaurants within walking distance to me are:

1. A southern-style diner with late hours. Lots of deep fried stuff. Good crab stew and hot wings. Expensive sandwiches. Fake scallops. Their food quality had plummeted the last couple times I was there, so I try to ignore it.

2. A Japanese restaurant. Good but not great sushi. Run by Mandarin-speaking Chinese people.

4. A Pizza Hut that also has a WingStreet in it. Good wings, better pizza than Domino's, much farther walk.

5. A Sonic. This is a drive-in fast food place with burgers and shakes and stuff. It doesn't usually come to mind when I'm trying to decide on a restaurant to walk to.

Me, I'd be thrilled to see something in it that offers food other than what we already have in the immediate area. A Chinese takeout, for example. Or maybe Mexican - we do have a fair number of Hispanics in the area. Or if someone could pull off an Indian takeout, or a Korean takeout, or Greek. I could do with a baklava stand. Anything besides more deep-fried chicken.

My chives are in full flower. I saw some bees frolicking in them this afternoon, but neglected to take pictures while they were there. The tomatoes behind them are also doing well. Still no fruit and only a few flowers.

Today I made graphs. Lots of graphs.

The goal was to make a two-month time series. I picked out 19 days. The figure for each day had four panels. Each panel had two lines. Each line had 110-190 dots.

Predictably, the first one was insanely difficult and took 5-6 hours. (Arrr Matlab.) After that, I had a script. The other 75 took maybe 20 total minutes (interspersed over a bunch of blog reading... >.>). Yay Matlab. :p

Printing involved some voodoo (is there any other software out there where, if something fails to work the first time you do it, it inexplicably works fine when you do it a second time? even if you change absolutely nothing in between?), but fortunately it didn't involve sacrificing any goats like the last time I had to work with YY-plots.

random thought for the day (...or month)

If they have enough advanced planning and funds, anyone can do anything they want to us at any time. The key is not in stopping them from doing things. The key is to stop them from wanting to.

One hundred eighty two days after I swung the clue-by-four, he said "I'm sorry."

So I called him an asshole.

I called him less mature than a 15 year old.

So I forgave him.

Headlines of our Lives

Apparently we're having another UCF Bonding Event this week, so here's my placeholder post in case any of them land here. :)

Going off the deep end with geometry

[Warning to Nathan: Lots of math is about to ensue. You might want to cover your eyes...]

Yesterday it took me all night to learn that single precision numbers and double precision numbers are not at all the same thing. Not that Matlab will tell you this, of course. They'll look exactly the same to the untrained eye. No, you have to specifically ask, using an obscure function such as superiorfloat(). All Matlab will do is inexplicably refuse to make straightforward plots of those numbers until after you change them.

Today I learned that it's quite difficult to rotate the axes of a cartesian system to anything other than 90 degrees, especially if you've never learned any math past calculus (and you didn't do so good in calculus).

... which will indeed do some rotating of the data. However, the end result won't bear much resemblance to what you had at the start.

Then (via John) there's:

... which uses linear algebra and vectors and dot products and all sorts of stuff that go completely over my head. I have no clue how the equations got derived, only that they don't seem to do what I want them to, and I don't know how to fix them. Also it occurred to me while I was fiddling with them that they'll only give me the x values, not the y values...

Snave tells me it's simple. Those matrices look scary to me. o.O

On Monday I'll reveal my utter ignorance to the local Matlab expert, and maybe she'll figure out how to do all this for me. Either that or I'll abandon this foray and go to Plan B (which is to do what my boss actually asked for as opposed to what he wants (and will probably be asking for when he finds out that what he asked for won't be sufficient)).

At the takeout where I worked, it was chicken, pork, shrimp, and vegetables. You could get each of those separately, or beef fried rice, or scallops if you wanted to pay more. We also had 'house special' lo mein, egg foo young, chow mein, chop suey, and chow mei fun. And it was possible to get sweet & sour pork, chicken, and shrimp together, but we called that a "combo" instead. (Which was not to be confused with our "combination platters"...). Then there was Hunan Triple Delight, which was chicken, beef, and shrimp. And Four Seasons, which was all four of the main meats. There were other meat combination things too that involved various forms of seafood.

To answer the unspoken insinuation in the question that you may or may not have intended: no, we did not serve cat meat. Chinese restaurants don't serve cat meat, they're subjected to the same health dept regulations as every other restaurant - which includes checks of whether food suppliers are approved or not. Chinese restaurant owners are either confused by the concept or insulted, depending on how often they've heard it. Either way it isn't very funny from the kitchen side of the counter. 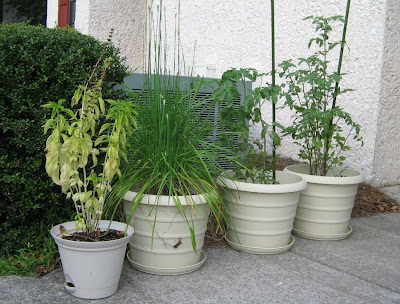 Here's what my garden looks like at the moment. To the left is the present state of my basil. I let five of the flower stalks do their natural thing, but have been trimming off any new ones I see. Still, it was too late, as you can tell by its pale yellow color... On the other hand, I have lots of little black seeds. I can make new basil! There are two small sprouts at the bottom, possibly the earliest seeds, which are making the original rounded leaves instead of the pointy ones.

Meanwhile, my chives are also flowering. None of the buds have opened yet, but I'll get closeups when they do.

The other two pots are tomatoes. These were originally planted by a neighbor who had 50 of them all in one tiny pot. He offered to give me a few. Somehow I ended up with 20 - about 15 in the two pots pictured and another 5 in a third pot on the neighbor's patio. (They're there because animals kept digging them up when they were on my patio.) Something keeps eating the flower buds, so I've sprayed them down with Sevin, so hopefully they'll actually manage to fruit at some point.

The Return of My Infamous Food Posts Part I: Soups

Do you cook? What do you like to make when you're cooking for others?

I do cook. By far I'm best at making soups. They're easy because it's much harder to burn something while boiling it than by doing anything else to it. It doesn't generally matter how much of any given ingredient is in it or whether I leave it out entirely. Textures aren't very important. They keep well and freeze well (try freezing them in individual portions for high convenience). Pre-boiling prep for the kinds I make tend to be limited to washing and chopping, as opposed to making dumplings or other heavily hands-on things (that is, I'm too lazy to make kreplach, even without chicken livers involved).

For every soup recipe I've developed, the important part is what order to add the ingredients. Things cook at different rates, so they go into the pot at different times. Dried beans take a long time and therefore go in first, while green peas are best if they're barely cooked at all, so they go in just before you turn off the heat. Meat takes a long time to get tender. Corn starts out tender, then becomes stiff, and then if you continue boiling it long enough it becomes tender again. Potatoes are a firm 20 minutes, even if the pieces are really small.

Additionally, almost all soups taste better if you leave it sitting around slowly cooling for several hours so the flavors can meld together. I generally leave it covered on the stove overnight, then move the whole pot to the fridge when I get up. Leaving it out doesn't seem to hurt the soup any, while moving a hot pot into the fridge right away does hurt other food already in it.

My main repertoire these days are Beef Barley Soup, Chicken Noodle Soup, Spinach Tofu Soup, Lentil Chili, and Adapted Canned Tomato Soup. I make these a gallon at a time, and they seem to still be good after two weeks, though your mileage may vary (I have an iron stomach). I used to make a pasta sauce that I adapted from canned clam chowder as well, but then Jim Wright posted an excellent recipe for making clam chowder from near-scratch, so I adapted a version of that into my regular rotation instead. (And speaking of Jim Wright's soups, he just posted a recipe for Sour Cream Potato Soup. I'm looking forward to trying it.) Last summer I often made this bizarre rendition of a gazpacho, but I'm not sure I like it enough to keep making it regularly.

As for what I make when cooking for others: well, unfortunately, I've yet to figure that out. I had a great tandoori chicken with green beans and basmati rice, but then I ran out of the tandoori powder that made it work - and haven't managed to find that brand again (Kissan Tandoori Masala, if anyone has heard of it; my empty bottle claims to have come from Canada). I can put together a decent basic lasagna, but that's not high on the presentation score. Then there's Pasta with pseudo-Alfredo, but I've yet to make it for anyone other than myself. It's colorful and tastes good, I just don't have houseguests anymore, like, ever.

These days, cooking for others mostly means work potlucks, and cooking for something to put on a buffet line is different from cooking a meal to be served at a table in one's home. I don't have a crockpot, which takes out anything that should be hot, such as soups. I'm not practiced in salads because I don't generally eat salads unless I'm at a potluck or buffet. My baking skills aren't worth mentioning (plus we always seem to have 50% dessert dishes). Mostly I just bring a big jug of fruit punch instead.

My loot from Janiece has arrived. As with everyone else, I'll refrain from saying what it is until everyone else has theirs. ;)

Also arriving today is what appears to be preloot loot from Michelle.

And a postcard from Rebelcat and Galenthias while they were in Crete.

And a package of dried fruits from my mother.