Other End of Nanowrimo 2009

At some point last spring, one of the trees disappeared. I don't even remember seeing a stump - it was just gone, with nothing but a patch of mulch where it once stood.

A few weeks ago, after heavy rains, the whole place started blooming in mushrooms. Lots and lots of them in big clumps. Here's one of the smaller clumps: 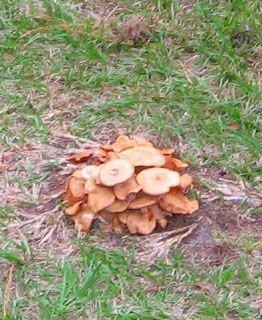 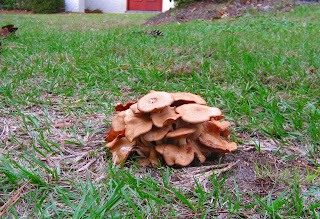 The biggest clump was about four times that size. No clue what kind they are, though they smell like portabellas. I guess the tree's symbiotic fungi are trying to find another tree.

Sidenote: my camera still takes macro shots because I remember what sequence of buttons to hit to get there, but I have no control over where it autofocuses. Thus the ..uhh, softening.. if you embiggen.

Some thoughts about electric cars

The main thing that keeps me from considering an electric car as my next car: lack of feasibility for long distance road trips. They cannot presently go for up to 15 hours without stopping. I can see three possible ways to fix that:

a) Make a car battery that can last 15 hours without stopping. :p I assume this is unlikely, considering that laptop batteries only last for 2...

b) Make a car battery that can be charged back to full within 10-15 minutes. Most of the blurbs I've seen talk about 2-3 hours. I'm not going to pull into a battery station and sit there for 2-3 hours while it charges, when I can pull into a gas station and be gone again in 5-10 minutes.

c) Make it so that the car batteries are interchangeable and can be easily replaced. I pull into the battery station, remove my depleted battery, trade it for a fully charged battery, and get back on the road. This doesn't have to be free (I'd assume some sort of nominal charge if there's a station attendant that does this), but it also shouldn't mean actually purchasing a new battery at full price each time. It probably would require all the car manufacturers to agree on a standard battery design. Ideally, it should be simple enough that I can change it myself without being professionally certified in the procedure.

How about hybrid cars then? If the gas charges the battery, then the battery can last 15 hours, and then the only difference would be fewer stops for gas. I could do that.

Story of my love life

Boy meets boy.
Boy wants to show up boy.
Boy does some sort of astounding feat.
Other boy? Does the same thing, only better!
Boy and boy probably go off to have a beer together.

Boy meets me.
Boy wants to impress me.
Boy does some sort of astounding feat.
I? If I'm attracted, I want to impress him.
I do the same thing, only better!
Boy slinks off feeling like a loser, never to be seen again.


And thus: I stay away from love lives. :p

Like I've done every November since 2004, I'm writing 50,000+ words toward a novel in the next 30 days. By tradition, it's something from my Fortress Launne series, which originally had six books in it, but they've shifted around a lot in the intervening years and are still six books, but not the six I'd originally envisioned. :)

Anyway, it didn't take long before I got distracted by the Nanowrimo forums. One of their threads is pictures of writing areas. Well, here's mine: 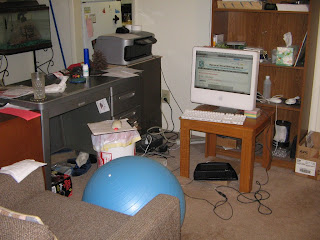 Messy, huh? It's the normal state of my living room, alas. The computer was originally on the gray desk at the left, but it's too tall for my current chairs - a blue exercise ball and a one-seater couch. I had others, but freecycled them a few months ago. (The couch will be too when it's time to move.) My mouse is on a clipboard over the trashcan, which I move back and forth depending on which hand I feel like using to mouse at the time. The white keyboard is wireless, but the mouse isn't - hence the length of wire to make it reach the couch when I'm not on the ball. The black "keyboard" under the table is my Alphasmart Dana - it's actually a better keyboard than the Apple.

For those who want to follow along to my writing angst trials and tribulations, I have a writing blog freshly ported over from Hobgoblin.net, which is sadly defunct at the moment. I'll be posting a lot over there this month. :)

On a completely unrelated note: yes, that was taken by my broken camera. It still takes pictures just fine, so long as I don't want to change any of its settings or compose or something else that requires the screen to be working...

On another note: I'm looking forward to finding out what my European readers will decide to be intrigued by in this picture. ;)