Since my life reboot, my leet code skillz have gone to whole new levels. Here's a representation of the kinds of things I've been doing for the past three months:


It looks at a big block of numbers, one row at a time, and interpolates for any missing values - assuming that there are no more than four missing in a row (in the row). It does this for six individual same-sized blocks.

It's in Matlab. There might actually be a simpler way to do this, but if so I don't know about it. (Obviously.) The fun part is: it only took me two days to work all that out. Leet skillz progress! :D 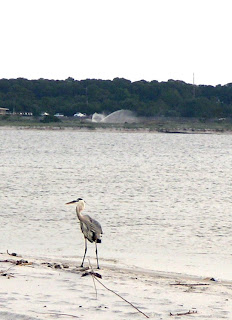 Part of my view into work: 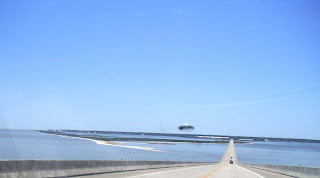 Yes, I think in terms of workplace, I've definitely traded up. :)

Also, in the hopes that I really am about to resurrect this blog, a picture of a cat: 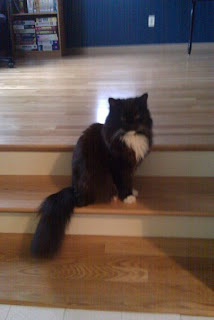 Specifically, it's this cat. I got back in touch with his owner, who sent me a more recent picture. Ten years later he's doing well and looks the same. :)

From GA to AL via IN

I loved my work and my boss, I liked most of my coworkers, and I had come to hate my workplace.

I'm doing the same work that I still love, so far I like my boss and coworkers, and I love my workplace.

All in all, despite two very strange years in between, I think I've traded up. :)

An Idea for Modern Education

Do a traditional lecture on the topic.

Assign standard homework. But for each question, ask where and how students arrived at their answers.

You can hope all you want that students will learn the material by attending your lectures, reading things you've assigned them to read, and getting a broad background on the topic from which they can draw to answer specific questions. But this is a day and age where they will just copy/paste the entire question into a search engine (including any misspellings). And there are lots and lots of people on the Internet who will happily write a direct answer to it if enough students input the exact same one. Yay for SEO longtails and ad revenue share.

Do a second lecture about all the online sources on the topic that students have found. "This one is right because..." "This one is wrong about..."

In this way, not only do they still learn the actual material, they also get some insight into evaluating sources on their own. And you learn where all the cheat sources are without having to look yourself. Win-win? :)

Note: I have no education background whatsoever except as a student.

In January, I was still receiving unemployment money while sending out job applications and receiving rejections. I was in the middle of sorting through nearly two decades' worth of life's paperwork detritus and preparing for a move, whenever that might be. I was waffling about where I wanted to go with content-site freelance writing. It passed the time while I waited for the next part of my path to magically appear, but was it worthwhile to do? Was I in or out on the challenge Bright Hub laid out for me with their new standards? Could any of this possibly make me a living?

In March, my friends with the seafood market invited me to move into their house and (more or less) join their family.

In April, eHow's WCP shut down, Demand Studios invited me in in its place, Bright Hub was really starting to grow on me, and all signs pointed to Go on the freelance writing.

In May, I moved from Savannah to Indiana. Then I spent the next five weeks in Taiwan, two weeks in Hong Kong, and half a week in San Francisco. I went places, saw longlost relatives, and met new people (including my niece). It was both a vacation and a form of imprisonment as I couldn't go anywhere or do anything without other people's approval.

In July, I finally completed my move to Bloomington. Bright Hub promoted me to Senior Writer (so I met and surpassed the challenge of their standards). Between them and Demand, I started making about half the money I needed to go back to living independently.

In September, I got a job: to go out on boats in the Gulf of Mexico in support of NOAA's oil spill damage assessment. I went on three cruises before fall sampling shut down for the winter.

In December, after weeks of no word from the cruise people, I began wondering whether I'd done such a terrible job that I would never hear from them again. Even though I know there's nothing going on until spring sampling begins. Writing continued in the meantime to pass the time.

And now we're back to January. I'm still living in someone else's house. Nearly all my stuff is packed away in storage. I'm doing really well at Bright Hub, and Bright Hub is doing extremely well on the searchable internet.

Where am I going next? Well, if all goes according to plan, I'll be working a lot of cruises in the spring and summer, and writing in between - both for Bright Hub and fiction. If all doesn't go that well, Demand Studios is still there as the backup plan. Will my finances become stable enough to move back out to a place of my own? I think that's the goal for 2011. I guess we'll see what happens from here.