On Christmas Eve, I had dinner with NeuronDoc, her husband TheHusband, and their daughter ThePinkThing. They were passing through on their way to Florida. As was required by Jewish Christmas traditions, we went to a Chinese buffet. Here's me and NeuronDoc after the meal in the restaurant foyer: 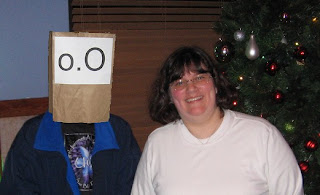 (photo of me was improved upon with some help from Random Michelle. NeuronDoc has her own photo from the event, showing what I look like without being improved upon in any way. >.>)

The food turned out not to have as much variety of Chinese as I had hoped. Usually they do better than that. Otherwise, though, we had an excellent evening and didn't try to strangle each other at all. :)

It has been brought to my attention that spammers have recently found a way to post comment spam on Blogger blogs without it notifying me via email. How they're doing it, I have no idea. I just cleaned off a bunch of them from General Comments and Smileys, which they seem to like for some reason. If you see more anywhere, please tell me.

To cut down on this nonsense, I've turned on captchas (which I typically hate with a passion), and all comments on posts over 30 days old now go into moderation. Hopefully that'll help. And hopefully I'll be able to turn off the captchas again at some future date.

Which came first? The sachima or the rice krispie treat?

A sachima is sort of like a rice krispie treat, except not with rice krispies, and not held together by marshmallows. Instead, they're sort of a flour-based poofy noodle, held together by melted sugar - though I'm quite certain I've had some made with honey. They also often include sesame seeds, raisins, nuts, and other stuff. The best ones are very moist and sticky, and freshly made in the bakeries of Taipei.

(I miss the bakeries in Taipei.)


These ones are freshly imported from Taipei to New York City, where John the Scientist bought them (thanks, John! :) ).

Aside from sachimas, I also grew up eating rice krispie treats that also didn't include rice krispies. My mother would make them with other breakfast cereals (captain crunch treats! corn pop treats!) and crispy noodles (like from La Choy; got served to the restaurant customers with the soups). Some of them were pretty good. Others, well, one could file them under "interesting." ;)

As for the title question: I have no idea. Wikipedia didn't say, and everyone else just copied from Wikipedia. T.T But I did find a blog of a western family living in Shanghai that I thought was pretty cool.

The time before that was back in mid-October, for $2.379 per gallon, which was right before it went up to $2.569 and stayed there.

There are certain advantages to not driving more than once or twice a week. :)

(or, alternate title: Where I've Been All Month)

Bloons Tower Defense 4 is the fourth in a series of tower defense games that I've been playing since the first one (Bloons Tower Defense, later followed by 2 and 3). In it, you pop balloons as they go around on a track, and try to get them all before they reach the other end. It's a cute game, and the bloon popping sound is a lot like for popping bubble wrap, which makes it very addictive. Here's some screenshots of the game in action:


So, basically, I wasted my entire first week of the month on this game. >.> Over the weekend, it occurred to me I could try to recoup some lost time by writing down everything I'd figured out in a series of strategy guides. Thus: Bloons Tower Defense 4 Strategy Guides for Map 1, Map 2, Map 3, and Map 4. :D They're long, detailed, and full of progress screenshots. I'll probably do one for Map 5 too, just as soon as I figure out how to beat it on level hard. Map 6, though, that looks terrifying.

While I was working on them, I clicked over to someone else's article about Bloons Tower Defense 2 - and noticed that it was terrible. Vague useless tips, some of which were completely wrong. o.O Clearly I'll have to write strategy guides for the other three games too, maybe when I've recovered from doing them for 4. I'm a bit sick of bloons at the moment. (Update: here's one for Bloons Tower Defense 1. :D )

Also while I was working on them, someone requested that I write a strategy guide for sudoku. So I did that too. :)

And that's been the first half of my month, which has gone entirely not the way I was originally planning... >.>