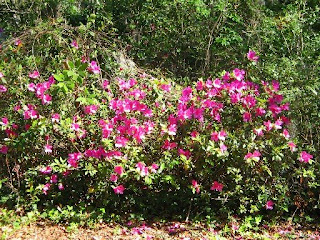 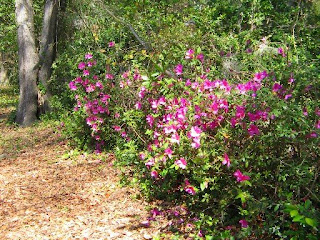 We've been having lots of flowers here. It turns out that the magenta azaleas across from my patio are still alive and well - and right now they're blooming with a vengeance. I can also see whites, pale pinks, and salmon pinks from here, though there aren't as many and most of them are nearly done blooming now. 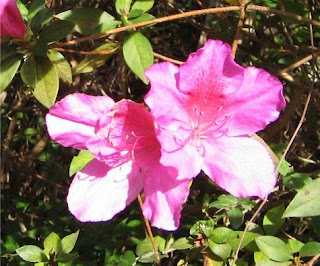 Yesterday, one of our members suffered a terrible personal tragedy. Out of respect for her loss, the UCF member blogs will be offline today. Our thoughts and prayers are with her. We will return tomorrow.

I have nothing to say.

I have lots to say, actually. I'm just not in the right frame of mind to organize my thoughts into anything coherent, that won't somehow manage to offend everyone left and right. I haven't been in a good frame of mind for almost a month now. Hence the silence, which is better than anything I might possibly say.

So instead, I'll just list everything I've been up to lately. Maybe it'll be an interesting read to someone somewhere.

b) There's either something odd going on in the water off the southeast U.S. coast, or both satellites pointed at it are glitching in exactly the same way. Which is it? I'm assembling the overall big picture so that we can look at it and hopefully figure that out. This is taking a while.

a) The RPoL chat community has become about twice as active as it used to be. First there was a keystone banning; suddenly, a slowly dying chat sprang back into full health and vibrancy overnight. Less than a week later, someone posted a thread in RPoL's community forum, asking about the chat - and for a while we were getting a dozen new visitors per day. That's settled down to 3-5 new regulars now, but it's still quite busy.

b) My favorite GM came back after a 5-month absence, restarted two of his games and made a third.

c) Mad Scientist on Facebook. T.T I have zombies, robots, a SkyCom AI, and a doomsday device. And I'm making more! It turns out that this particular game is the perfect speed for playing in between rounds of working, so I expect I'll be playing quite a lot.

a) Nonfiction is basically at a standstill (in case that wasn't obvious by observing my blog). I haven't written any new eHow articles either.

b) I've been putting a lot of work into Vengeance Returns. It's accumulating a few hundred words or so every other night. It turns out that midnight to dawn is an excellent time for writing. Unfortunately, this also means less sleep, which is probably contributing to the whole bad frame of mind thing.

That pretty much covers it, I think. How are you?