1. The empty restaurant building across the street from me now has a sign that says:

So. More chicken then. But at least it's not the battered and deep-fried kind, like the last two places (that failed there). If it's anything like the one at the mall food court, I'll probably eat there regularly. If not, well, I hope it will serve actual Cajun food, which the mall food court doesn't.

2. I stopped using the shoe lift.

You know how when one of your joints needs to be cracked, it feels sort of itchy and naggy (and eventually stabby) until you crack it? Well, that's what happens to an undefinable spot in the back left of my skull after a few weeks of shoe lifting. The chiropractor couldn't reach it. The backup chiropractor couldn't either. It takes weeks after I stop shoe lifting to work out on its own.

I think I'll save the shoe lift for times when I'm doing lots of touristing.

3. She is a dear, sweet little old lady. She was retired and gone, but says she found it not to her liking. Now she's unretired and back, and watching over us all once more.

4. Good things that have ended sometimes have epilogues and sequels.

Business at their wholesale seafood market is slow but growing steadily. The bun that came in February is now in China. The bun's brother, who was in China, is now here. A few of the original takeout customers have indeed found their way there. And apparently my Mandarin has improved due to those eight months of being unable to communicate with the new takeout staff otherwise.

6. Last year I was paid to skulk around a dormful of sleeping children. Last week they paid me to do it again. Next year I'm penciled in to do it a third time. Who says peace of mind is priceless?

7. Not only can I touch my toes without warming up, after today's yoga class I could touch my thumbs to the floor! Yay progress! :)

The world has an emotionscape, where all sorts of emotions are flying around everywhere all the time. As an empath who constantly experiences other people's emotions, I've come to understand the difference between an emotion that I myself am feeling, and an emotion from an external source. It's subtle, and the brain is naturally inclined to assign internal reasons for emotions that appear without one, which makes it all that much harder to distinguish. If anger appears, then my brain finds something to be mad about. If sadness appears, it finds reasons to be sad.

Last weekend I lost all will to do anything other than lie around staring at the wall. I didn't want to do anything else. I had no energy to write anything, or cook anything, go out for any reason, or otherwise engage in anything. Attempts to snap myself out of it by jumping into the apartment complex pool were fruitless. I played a lot of Bloons.

But I wasn't sad. I have nothing to be sad about. I just had every other symptom of a clinical depression. It went away sometime yesterday evening, possibly because I ate something specific that got my brain moving again (though I don't know for sure). Still, it was an interesting experience. It seems I've gotten so good at separating external emotions that now I can be depressed without being depressed.

I remember the world holding its breath, watching to see what we would do. I remember when we stood at the precipice, on the cusp of world unification, strength in togetherness, so many directions we could go, so many possibilities. All it needed was a great leader with the confidence to take that step forward. And I remember thinking, this man, the one who leads us, is not that man, and he will stumble and fall.

I remember the aftermath when "we" decided strength came from standing alone. It's something a great many teenage boys start out thinking but eventually, as they mature, learn better and grow out of. I remember thinking that the one with the most power had not. Many people stall out somewhere along the way, for many reasons. It's unfortunate that one of those had come to that place of power, a scared little boy instead of a true adult.

I remember when we became "we" and eventually not "we." For me, it was when he declared war on "terror" - and I knew we would be tilting at windmills forevermore. That was when he lost me.

But I remember all the hope in that first perfect moment.

While I was taking keyboard pictures yesterday, I also took some of my office. Here's what my desk area looks like: 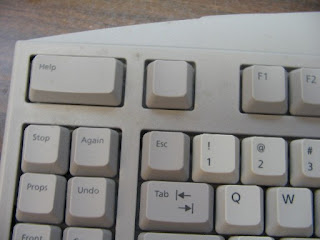 The esc key so needs to move to that blank key above it. -.-


By popular demand, here's some more pictures of my keyboard(s). This one shows where the tilde is located: 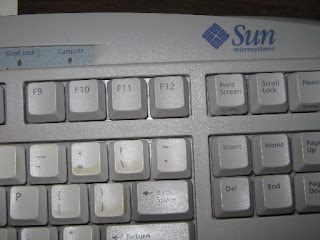 And here's the whole keyboard, followed by my home keyboards. The work one is from Sun and goes with a Sunblade running Solaris (unix). The main home one is a wireless that came with my iMac G5. It's a piece of crap compared to the ADB that came with the Powermac in 1996. I really wish Apple would go back to whatever technology/company made their ADB keyboards back then...

(Note to Nathan: It's math again, but this time with no numbers at all! Only pictures! If it still doesn't make sense, well, the pictures are pretty....) 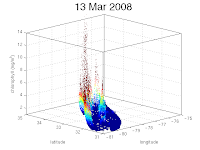 This is the type of picture I've been making for the past three weeks. That rainbow blob thing in the middle is made up of several thousand dots1. Wouldn't it be nice if I could stretch them out to fill the whole box instead of having them all jammed together in the middle?


Here's the direction I want to stretch them. The one on the right is a bird's eye view of the same thing. Unfortunately, I can't stretch them out that way. I can only stretch them in one of these ways:


Obviously, then, I should move the blob until it's pointing in a better direction. To be able to stretch them the way I want, it needs to be pointed like so: 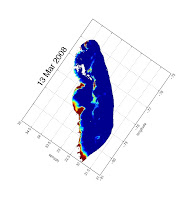 Lots of people made lots of suggestions, all of which had strange side effects, so in the end, I didn't end up using any of them. See, it turns out that although it's hard to rotate a blob of dots when you have them in a box, it's not at all hard when you've got them on a circle2. In fact, it's ridiculously easy.
Yep. That's what I call thinking outside the box. :) And it allows me to do this:

Footnotes for the advanced class:

1. 79,744 total data points. Which needed to be rotated 55 degrees counterclockwise.

2. Cartesian coordinates are X, Y, Z. Polar coordinates are directions with magnitudes (or angles with radii) (or, in 3D, it's azimuth and elevation to go with the radii). Rotating in polar is easy because all you do is add to the angle. So I converted from cartesian to polar, did some addition, and then converted from polar back to cartesian. Voila!