There's a whole row of enormous hedges along one of the gravel roads on the campus where I work. Right now they're blooming. I have no idea what they are.

My office used to be in that white building. Back then it wasn't such a nice, gleaming white - it looked more like a dilapidated shed. Then one day they decided it'd be good to have it look less like an eyesore for when visiting dignitaries go by. This is probably the most scenic-looking version of it I've ever seen (including in person, while taking the picture). 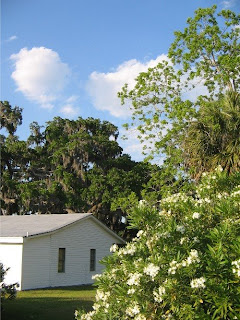 As you may have noticed, my post rate has dropped precipitously in the last couple months. Unfortunately it's going to get worse. I'm probably not going to post again until the end of May.

I don't know what the flowers are, but they're gorgeous.

The leaves remind me a bit of a mountain laurel, but the flowers are all wrong.

Er.... Your saying you didn't know didn't necessarily mean you wanted to know, did it? :)

I figured you'd be most likely to know, out of everyone who regularly visits. But no, I'm not dying of curiousity of what they are. ;)

Well, whatever they are, they're not hardy in zone five. :)

I remember these bushes growing in the garden when I was a little girl. I believe that the leaves are very poisonous. That's why wildlife doesn't graze them. I am racking my brain and can't recall the name. It should pop up sometime.....!

It would certainly make sense for them to plant poisonous stuff ... we're in the middle of a nature preserve that's chock full of (yummy, yummy, alas not-allowed-to-be-eaten) deer.

Thank you so much for posting these flowers! They're beautiful, and I can't wait to draw from them and that perfect-composition photo of the building. (We are in chat right now, readers should know the photographer gave me permission in chat or I'd be asking in this message)

And I'm looking forward to seeing what you draw from them. :)

If anyone other artists want to draw from them, feel free. I'd appreciate seeing what you do with them, and do credit me if it's from the bottom one with the white building in it.

Makes sense Brenda has seen them as a child -- Buenos Aires is at latitude 34 deg and Savannah is 32 deg. Same climate.