Apparently, the most fascinating part of my previous post was the wall outlet. It inspired a lengthy conversation about wall outlet differences in appearance between the U.S. and Croatia. So, for bakho's edification, a documentary. :)

Here are the three main types of outlets found standard in most USian houses and apartments. From left to right, these are TV cable jack, electric, and phone jack:

On the electric outlet, note that there are two slits and a round hole, where one slit is bigger than the other. Originally (back a few decades), outlets were just two equal-sized slits. Then one day, for safety reasons, they started making them with one larger than the other, so that plugs can only fit into them one-way. A while after that, the third hole was added, for even more safety. I think it's for "grounding" purposes.

Here are the different types of plugs that go into the electric outlets: 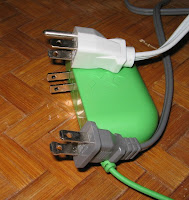 The green plug has two equal-sized prongs. The gray plug has the type where one prong is bigger than the other. The white plug has three prongs. All three of them are in use, depending on what's at the other end of the cord, so our wall outlets are designed to handle all three.

And here are the phoneline and TV cable plugs:

(Maybe our next longwinded conversation will cover the differences between dialtones and ringtones from country to country.)

And finally, just to round things out, our standard USian light switch:

UPDATE: Apparently, the most fascinating part of this post is the light switch. :p

Well, my house has phone jacks that are 4 round holes arranged roughly on the corners of a square. This is the system that was in place in the US up until the mid-1970s (my house was built in 1973), when you could not buy the damn phone, but had to rent it from the phone company. With the advent of the modern modular jacks, other people started making phones, and I remember our first phone that was not purchased from the phone company.

When I bought the house, the previous owners had lost the converter dongles (the house had been empty for 3 years while the heirs of the previous owners wrangled over the estate), and I was afraid I would not be able to find them, but the local radio shack carries them.

Here is a picture of the old jacks.

John, it's not horribly difficult to change out the phone jacks.

MWT, new code for American outlets is now upside down from what you have.

The reason is that if something falls on a plug, you want it to hit the ground first.

Hmm, that would explain the standard British outlets (and also notice their light switches).

Bakho said he was going to take pictures of the outlets in his house and do a counterpost to mine. I'll link to it when he's done. ;)

Michelle, switching out the phone jacks in this house would involve some carpentry work, as they are recessed.

However, since I use Vonage and cell phones, it's not a big deal for me. The local phone company does not extend DSL this far into the sticks, so I'm stuck with a cable modem. Screw AT&T.