Every year, the institute where I work has an Open House, wherein we let the general public mob the place. Allegedly they're there to learn what the institute does to deserve taxpayer money, and maybe some basic marine science too. In practice it's more a place for small children to get their faces painted and do crafts and run races and play inside a giant inflatable whale. We have a jazz band, and in some years people walking around in costumes of marine creatures (and from Spongebob Squarepants).

Even so, every year we try. This year I made a poster: 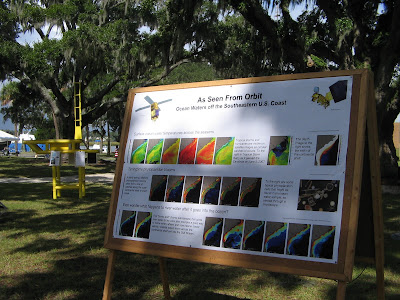 (click to read)
It was as dumbed down as I could get away with. The institute faculty don't seem to know how to explain things to the average carnival-minded layperson of casual non-interest, and the other posters were pretty technical. Mine had people standing in front of it longer than the others, so I call it a success. :)

Umm, I don't know that I should point this out, but your bay shots look a little mammogram-ish. ;)

Jeri: Thanks. :) Though I'm not sure what it says about you, me, and/or the sad state of the publishing-layout world that you immediately figured out I did it in Powerpoint.

Umm, and thanks so much for that other observation too. :p As it's my standard satellite image crop, I have thousands of them that look like that. I don't know if I'll ever look at them the same. o.O

Rebelcat: You can click the picture to get the full-sized version. Most of the text is readable at that size. Unfortunately I don't have anything larger than that.

Very well done. I think you successfully dumbed it down to the point that any non-biologist could take interest in it.

No photos of you in a Plankton costume, though? =P