Over the weekend there was a nation-wide protest of the passing of Prop 8 in California during the last election. (Actually there were a few participant cities outside of the U.S. as well. but it was mostly national.) Prop 8 is a ban on gay marriage. Individual states have been arguing for or against such a ban since 2004; Georgia, for example, passed such a ban into its constitution back then. This year there were several states asking its citizens the same question, including California - that famed bastion of gays and liberalness. Surprisingly, they voted to pass it.

So there was a protest. According to the overall organizer website, Savannah had one scheduled. We were to meet at the corner of Bull Street and Broughton Street and march to Johnson Square. 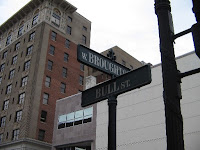 I didn't find out about this until an hour before. Also it was forecast to rain all day. But I went to check it out. Unfortunately, I was the only one there as far as I could tell:

After about half an hour of walking back and forth by myself (without the yelling or sign waving; I had no sign), I gave up and went home. It started raining heavily about five minutes after I was back in my car.

Fortunately for the rest of the nation, it looks like a lot of other cities had successful turnouts. Next time, whoever's in charge in Savannah (if there is anyone in charge, and I'm guessing there isn't) needs to give louder and earlier notice about such things.

Meanwhile, it would probably be more effective to bring the issue to the federal level and get a SCOTUS ruling for the entire nation instead of doing it piecemeal like this, one state at a time.

That's unfortunate that the turnout was not there. Prop 8 is such a stupid thing and these religious and right wing nutjobs that think they can just deny individuals a basic human right should have something very unfortunate happen to them. In light of the election and then Prop 8 being voted in it seems like two steps forward one step back. Grrrrrrr

I think you're right about a SCOTUS ruling, like the one knocking-down the bans on interracial marriage. But I don't expect a challenge of that nature any time soon.

I found out about it the day after - Fairbanks had a turnout of around 30 people, which isn't bad considering the fundamentalism of a good portion of our population.

Laws like Prop 8 make me feel stabby, which is NOT my default setting.

OMG, what the hell have I started. Be it known that I am officially in a good mood today. Downgrade me from Stabby to merely Pokey. :D

I suspect that this is just the beginning. The fundie wingnuts got immediate gratification on the prop 8 vote, but I don't think they anticipated the backlash.

As I said a couple of months back, I hope this does end up in SCOTUS' lap. This is a basic Constitutional issue and we need a national decision on basic human rights, not a decision based on the right wing Christian agenda.

Be careful what you wish for: I'm not convinced that the SCOTUS ruling would go the right way. Actually, I really expect it wouldn't, at least right now.

Unhappy as I am with piecemeal, I think the SCOTUS would be more likely to go the right way if same-sex marriage was legal in enough states for it to become a Full Faith And Credit issue instead of solely a Due Process issue. I could be wrong on that point, especially since the Full Faith And Credit clause does not require a state to recognize a marriage from another jurisdiction if it's against public policy.

But on the Due Process issue (which is what it would fall under right now, with the claim being, I believe, that any consenting adult has a right to the benefits of the state-recognized institution of marriage with any other consenting adult), I think you at the very best have a 5-4 (in favor of same-sex marriage) for the foreseeable future. And if Stevens retires (he's the oldest Justice on the bench), I don't know that it wouldn't go 5-4 the other way; while an Obama nominee would presumably be a younger liberal, nothing is ever guaranteed (Justice Souter, for instance, was appointed as a conservative and has proven to be one of the most consistently liberal members of the bench, not unlike Chief Justice Earl Warren decades before).

And, in my opinion, the four votes against legalization are pretty secure: Roberts, Alito, Scalia and Thomas aren't going anywhere.

But I could be wrong.

Yeah. I'm thinking in the longterm, actually. At some point there's going to have to be a SCOTUS ruling but it wouldn't be good to have one right now.

Blacks have had their fight going for over 50 years and there has been a lot of progress for them in that time. GBLTQ has only just begun. I'm looking forward to where we'll be in 50 years.

Well, I guess a turnout of one is a turnout of none... better luck next time, friend. I support the cause, but I don't think there will be any protest rallies here in Hicksville, Texas.

I say that and then think, well, no, maybe the student GLBT organization will do one. I hope they advertise well enough in advance, though...

Hey, you never know. Texas as a whole had pretty good turnout this time around, with very little notice. I'm hoping they'll do it again sometime soon, now that everyone knows there are protest rallies to be had.

Maybe Savannah will have a few more people show up next time. ;) Downtown Savannah is a pretty liberal place because of the art school.