Diamond Head is Waikiki's most recognizable landmark. In the past it was used as a military sentry point - and there are old bunkers all along the top of the rim facing seaward. One such bunker is now a tourist destination, at the top of a brisk, steep hike from the middle of the crater, best done in the morning before heat and crowds appear. 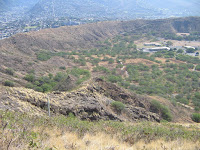 inside of crater from near the top of the trail 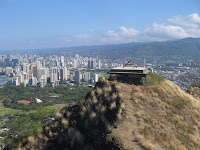 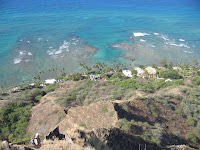 looking down the slope, southward

The Bishop Museum is allegedly an excellent place to learn about Hawaiian history, culture, and natural history - but this is probably more true when the main exhibit hall isn't undergoing renovations. Most of the rest (five buildings and a courtyard with carnival rides) consists of interactive exhibits suitable for children, which isn't really worth the admission (full, even with renovations occurring) if the group is adult-only.

One of the interactive exhibits was a giant model of an active volcano. There were buttons to control the size of the eruption. The brochure made it sound really exciting, and so that was what we went to see. As with the rest, it probably is very exciting to children. 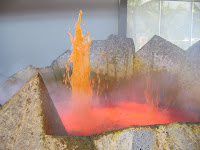 Beach of the Day:

Waikiki Beach is artificially extra-wide with soft light-colored sand and gentle waves due to groynes. The water stays at 4-5 feet deep for quite a distance from shore, though eventually it becomes possible to trip on reef rock. It's surrounded by highrise hotels and about as interesting to swim in as a pool.

view of Waikiki from top of Diamond Head 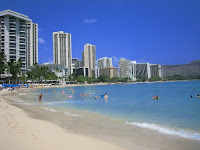 On the other side of the groyne, where there is no sand whatsoever and waves crash violently against the seawall under the concrete walk, it's possible to see lots of different kinds of fish.

I've gotta think I'd avoid building inside a volcanic crater no matter how long it's been since the last eruption. Highly cool, though.

Well, the only thing in it (aside from visitor center, etc.) is a military installation. People don't live there.

Also, it's not going to erupt again. The magma source has moved on. ;)