(For those wondering how I ended up at Vegas on a Hawaii trip, let's just say that my mother is easily distracted by shiny objects.)

Las Vegas is best known for its casinos - but there are lots of other things to do there besides gamble. There are bunches of elaborate themed hotels all next to each other along ten blocks of the same street, known as "The Strip". Each hotel has its own set of attractions, the restaurants are outstanding, there are always a lot of great shows going on, everything is open extra-late, and best of all: all the parking is free. If one ignores the glitz, all of these things fit my idea of a great place to live (if only I could afford it). 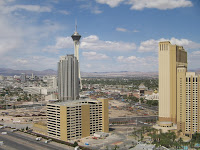 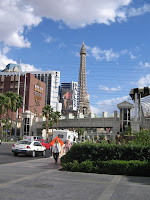 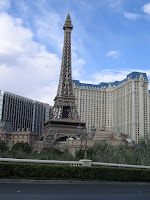 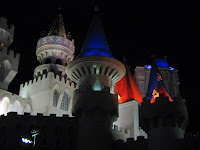 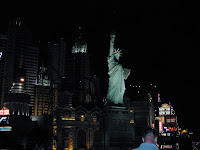 the Statue of Liberty outside New York New York Hotel

At Mandalay Bay, they have an aquarium called Shark Reef. There were indeed sharks in it, lots of different kinds, but they all swam too fast for my cheap automatic-everything camera, so here are some pictures of other fish I saw. 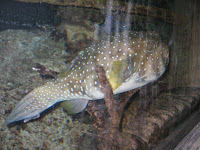 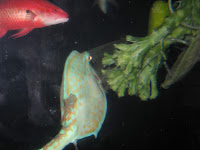 The trick to capturing aquarium fish on film is to use flash at an angle to the glass - otherwise the flash bounces back and glares everything out. (Not using flash results in blurry pictures.) (Possessing a better camera - one with manual focus - would've been an even better trick.) 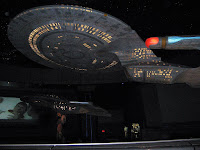 Star Trek: The Experience at the Hilton basically consists of two immersive "shows" where the audience is given a part in the story. In one, we were a bunch of civilian lab guinea pigs participating in an experiment run by Voyager's doctor that got hijacked by the Borg, and in the other we were civilian travelers inadvertently beamed into the future - and then chased by Klingons. The transporter effect was the best part of the latter - it was totally real. One minute we were standing in a square blue-gray cargo bay, then it went pitch black and there was a whoosh of air, and then we were standing on a bunch of lit circles in a circular beige room. The walls, ceilings, and doors were all completely different. They also had the Enterprise-D bridge, and I badly wanted to go sit in the captain's chair - but we got hustled out of there too fast.

On the way to the shows, they had a small museum and an extremely detailed timeline listing everything that any key character had ever done. I spent a lot of time reading it. Outside the museum, there was a realistic Quark's Bar (I didn't try the food, just walked around in it) and a gift shop where I spent too much money on a blue TOS science officer's shirt that I probably won't ever wear. But I own a Spock shirt now! My life is complete!

I have to check out the Star Trek experience next time I'm in Vegas. I usually wander the strip and hang out in my hotel but never do any shows or anything. Next time i'll be transported to another planet just like you.

Thanks for actually reading my post before placing your ad here.

We walked past the Wynn a few times. I can't remember what show was in it while we were there, but there weren't any attractions listed in the guidebook that caught our eye. There was also nothing on the outside to suggest we wanted to go inside. Maybe some things to think about improving, so you don't have to resort to blog comment spam.

I liked the Klingon adventure better than the Borg one, for the same features you mentioned. :)

And Quark's had interesting drinks, but the food was pretty average bar food with a different name. :P