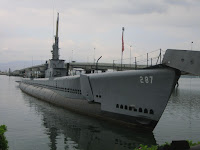 **
The USS Bowfin, a submarine launched on the one-year anniversary of the 1941 attack, is open to the public for audio-guided tours. Inside, it looks similar to a battleship except smaller and much, much narrower. (Note: my experience of battleship interiors consists entirely of the USS North Carolina - as viewed while walking through at high speed.) It's amazing how many people they managed to fit in it, not to mention the number of enormous torpedoes they stashed away front and back. 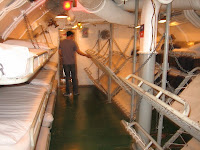 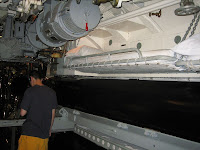 **
Aside from the submarine itself, there is also a museum about subs in general, a park with lots of different kinds of torpedoes and the giant guns that shot them, and a small outdoor memorial to all the U.S. submarines and submariners that were lost during the war. 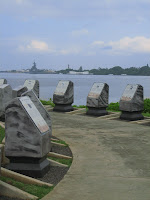 The USS Arizona is the main memorial people think of when it comes to Pearl Harbor memorials. It sank with over a thousand people still on board, and most of them are still there. The memorial was built over its midsection, and the flagpole is where the ship's flagpole was. Visits begin with a 20-minute documentary about the context of the ship's sinking, using all-original historical footage, which does an excellent job of setting the mood before the ferry ride to the memorial itself. 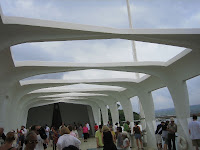 **
The inside feels open and peaceful. At the other end from the ferry landing, the names of everyone who died is inscribed on the back wall, from floor to ceiling. The part that really got me, though, was the small box to the left. On it were the names of all the survivors who had come back to be buried with their shipmates, the earliest in (I think) 1981 and the latest just a few years ago. 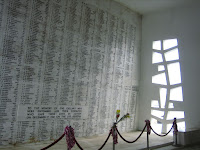 The USS Missouri was where the Japanese officially surrendered to the U.S. in 1945. It's right next to the USS Arizona. There is also a USS Oklahoma Memorial - a battleship that capsized during the attack with hundreds aboard, and the second largest number of casualties. Unfortunately, we didn't have our act together enough to visit either of those. 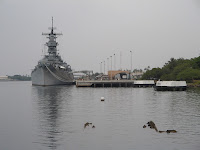 USS Missouri from the Arizona. The white buoy marks the end of the sunken ship.

The Polynesian Cultural Center, although the admission seems rather steep at first, is actually well worth the money. Tickets allow visitors to enter for up to three days, and include a free memento picture, snailshell necklaces (in lieu of fresh flower leis), guided tours of the whole park in a choice of languages, canoeing in their central canal, an IMAX movie about coral reefs, and bus transportation to and from nearby Laie.

*
View on the central canal running through the whole park
Each of the seven mini-villages represent a different Pacific island, with authentic buildings and cultural information explaining their shapes and purposes.

*
New Zealand is another name for Aotearoa.
There are music and dance lessons specific to each island. There is also a place for Easter Island. 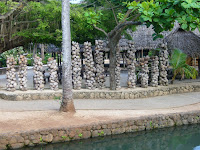 *
Columns of coconuts in Samoa 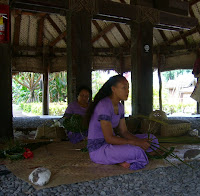 *
These women were making grass hats. 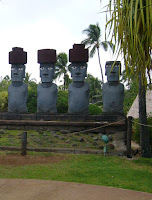 *
Easter Island exhibit
The highlights, however, are all in the 20-25 minute afternoon shows. Six of the villages present them on different aspects of history and culture. I learned all about coconuts in Samoa, how ukeleles were invented in Hawaii, conch shells, drums and clapping in Tonga, quite a bit about the uses of different plants to make buildings, clothing, and/or food, and was starting to get a grasp on the subtle differences between kinds of dances at each island. 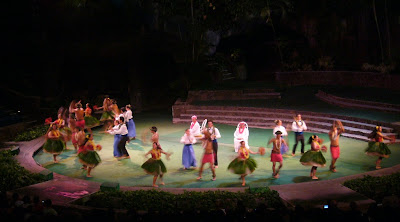 *
Then there was the evening show. As luau entertainment goes, it was pretty spectacular - especially the Samoan fire knife dancing. However, we'd just been to a smaller (and more expensive) luau a few days earlier, and it was a bit much right afterward. They also sell authentic luau food between the last of the afternoon shows and before the big main show, but we skipped out on it and ended up at McDonald's. (We should probably just have gone to the Polynesian Cultural Center the first time.)

Beach of the Day 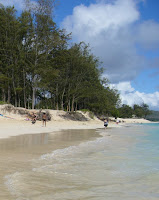 *
Kailua Beach is on the east shore. We went there in search of fine white sand. It did turn out to be softer and lighter in color than some of the other beaches, but still isn't Florida calcium carbonate white. The waves were relatively gentle, and there was a wide flat island that looked close enough to walk to (but wasn't really).

I can't say it'll never happen, but I just don't see myself having the opportunity to visit Hawaii...which is really a shame because The Arizona and other exhibits at Pearl Harbor are way up at the top of the list of places I'd like to see. We have the Intrepid Sea, Air & Space museum here in NY, but that's really more of a display of hardware than a memorial. There's no emotional impact and I can tell, just from your photos, that Pearl Harbor is a real experience.

I didn't say that as well as I would have liked, but I trust you guys to read my mind.

Also, today's beach is my favorite so far. Damn, that place looks idyllic.

Interesting about the sand. A friend brought me back some "Hawaian" sand, and it is medium grey in color.
I notice that your mother likes to take nature photos, while your cousin Angela prefers human monuments.

I loved the Arizona memorial, people were very respectful. It had the feeling of a cathedral. The thing that moved me to tears there was the small, low front memorial - the men who had died later, and had chosen to have their remains returned to be buried with their shipmates at Pearl Harbor. That's dedication to their ship.

Nathan: I think it helps that the actual ship with the actual people still inside it is right under your feet, and you can see the top of it through the windows. There's an oil slick where it's still leaking the same oil it was leaking when it sank. No museum can come close to that.

Also, I added another Waikiki Beach pic to the earlier post.

Brenda: heh, actually I'm heavily slanting what you see by strategically cutting out all family members. My mother's first priority is to take pictures of family. Angela, on the other hand, has a wide range of both kinds - people and places - but I didn't get copies of her pictures until a few days ago. All of my mother's Pearl Harbor pictures had us prominently in them in very inconvenient ways, so I used Angela's instead.

I was hoping to see black sand while I was there, but apparently that's only on the Big Island. That's where I'm going on my next trip there.

Jeri: Yeah, that's what got me the most too.

Ah, well. I suppose one could include family as part of nature (or more like forces of nature). Sigh!

Was there anyhting at the Polynesian Cultural Center about the Taiwanese Aboriginals? Since htat's who they're all descended from...

Brenda: I've been to the Vietnam Memorial as well, and while I agree that it's profoundly moving, it still pales in comparison to the Arizona.

John: I didn't see any mention, and doubt there was any, but we were only there for half a day and didn't get to see absolutely everything they had to offer.