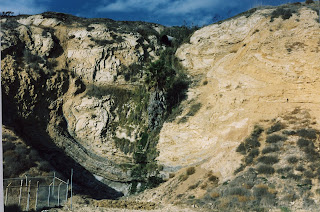 This cliff is part of a rocky beach somewhere in southern California. Notice how there's a dark-colored band of rock that winds around the bottom, like a bowl, that there's more tightly folded light-colored rock in the bowl, and there's a big crack down the middle (with the trees growing in it) that doesn't seem to go through the bottom of the bowl.

My first thought was that the crack is a fault. The light-colored rocks on either side of it don't appear to meet up with each other. However, because the dark-colored band is continuous along the bottom, it might be a dike that just weathered faster than the surrounding rock.

Which is not to say that there aren't faults in this picture. To the right of the bowl, some of the light-colored rock is doing some interesting folding action, and in one spot it comes to an end against another band of the same stuff.

All in all, a fun little head-turner for the casual roadside geologist. ;)

As for where it is, I hope someone out there can tell me. The picture was taken in December 1994, and is of the same place as these: 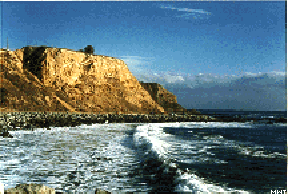 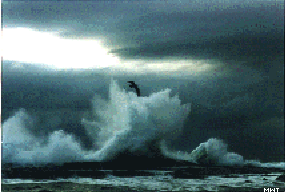 I was there with some extended family during a two-week visit, my first trip to California, and they were showing us around.

I mention all this now because I just found the original photos while excavating my storeroom, and was rescanning Crash of Waves for a friend to turn into art.

California has 840 miles of coastline. (more than 3400 if you include bays and inlets).

Methinks you could narrow this down just a tad.

It's somewhere in the general LA area, because that's where we were visiting. But since we drove everywhere, it could be anywhere. It's not Santa Monica and is south of that, but that's all I know.

Well see? That removes a WHOLE lot of coastline from consideration.

Note to everyone: It's not Morro Bay!

Is that the Loch Ness monster in the last picture?

(wrong coast for me to guess. I was in CA for two weeks when I was 8.)

I did say "southern California" in the post. >.> And think of it like those "have you seen me" pics of missing kids. They all look the same to me, but if I actually knew any of them I'd probably recognize them instantly. So it is with anyone who's actually been to that beach a lot (I hope).

Michelle, you're free to guess east coast locations if you really want. ;) Where are you seeing a Loch Ness monster? It's waves with a seagull flying past...

The picture is really pixelated, so it looks like Nessie's head sticking out of the top of the wave to me.

No offense, but I think that's more exciting that some silly old seagull. :)

And I'm pretty sure I can see Mothra poking its head out of one of the crags on the right side of the first frame.

RUN AWAY! RUN AWAY!

I want to say that's somewhere between Rancho Palos Verdes and San Pedro, but I don't know for sure. There is definitely some impressive coastline along that stretch, some of it fairly dangerous if you decide to explore by foot.