Please support President Obama's plan for health reform in 2009. We need to bring stability and security to those who currently have insurance, affordable coverage to those who don't, and rein in the cost of health care.

We are not the first generation to tackle the cause of health reform, but we must be the last.

We need this. It's an excellent, well-thought-out plan. Please don't destroy it.

I signed the above shortly after the speech. Most of it is pre-written but there's room for individual comments on the form. It automatically pulls up your particular representatives when you fill in your street and zip code. I think people who live in red states especially should sign it.

On the whole, I like the proposed plan. It won't be as nice as what other countries have - but it accounts for all the ideas and concerns from all sides, it's realistic and therefore has a chance of actually passing, and it's an important first step in the right direction. Here's a flowchart that summarizes it pretty well (click for larger version): 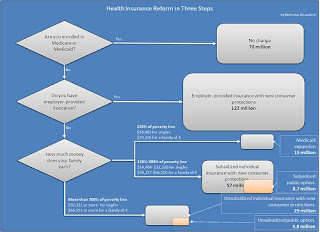 My favorite part (from the speech) was:

These are exactly the sorts of things I worry about most. Back when I had health care, I wondered what would happen if I passed my lifetime cap - would I just be expected to drop dead at that point? (Apparently the answer is yes.) And now that I don't have health care, the pre-existing condition clause is a bit worrying, if I were to develop something before finding a job where I had health care again. (And, I might add, until the speech I hadn't known that people got denied health care for pre-existing conditions they didn't even know they had. o.O)

... individuals will be required to carry basic health insurance - just as most states require you to carry auto insurance.

I understand the reasoning behind it. But the exemption bar had better be high. Better would be to just put all the people below the exemption bar on a public option for free, though that raises some questions on how it would affect the whole self-sufficiency thing.

In general, I think the speech has brought the health care reform conversation back on topic and moved it forward another step. Hopefully good things will happen from here.