Package of Sachima: The Sequel

At the same time that I received a box of sachima from John the Scientist, a couple friends also received packages: Anne got a box of instant ramen, and Michelle got ...tentacles.

Michelle didn't actually want her tentacles, so she sent them to me (so that I could, in turn, donate them to the nearest poor, unfortunate octopus that had lost its tentacles in a terrible accident). Meanwhile, I drooled over one of the ramen brands that Anne got, which inspired John to send me a whole case of it. Thus: triple loot for me. :) 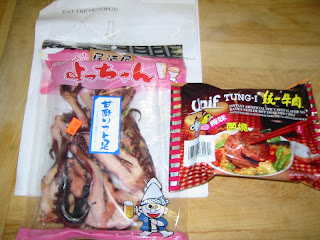 The tentacles have now been reattached to a deserving octopus by a crack team of vet surgeons. Here he is, all happy to be able to catch his own food again:

(Note: any similarities between this octopus picture and those found by googling "plush octopus" are entirely coincidental.)

The ramen has now been sampled, and indeed it is the brand I remember fondly from 15 years ago. :) And the sachima? I'm down to seven of them (out of an original 24). The taro ones (purple) especially are pretty good, though my favorite are still the plain (yay nostalgia ;) ).

And finally, along with tentacles, Michelle sent me one of her old cameras. Now I can finally show everyone what the screen on the broken one looks like: 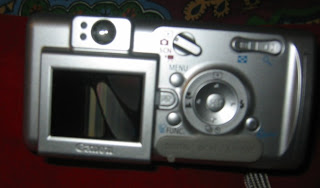 It started out as all-white with diagonal cracks. As time has gone on, it's been turning into ovals of white with rainbow stripes. Picture taking is still perfectly possible through the viewfinder, as long as you don't care what the camera chooses to focus on, or the exact composition, or changing the flash function, or any of the other settings, or seeing the results instantly...

Did you get the spicy kind or the regular kind 15 years ago?

Glad it was the right brand. Unif (Tung-I) manufactures in Vietnam, but they are a Taiwanese company.

I got the regular kind before. And also remember the noodles being somewhat wider. But the taste is the same. ;)

So cute! I love the "rescued" octopi. And I'm saving my Tung-I for last. I only have that and one Sapporo left. :)

I think that's actually a hexapus -- but I'm sure he sees it as an improvement over being an octoplegic. :)

I wondered if anyone was going to notice that. :D

The noodles got thinner when Unif moved their manufacturing from Taiwan to Vietnam :(