My quest: To play Emperor: Rise of the Middle Kingdom, a game that came out in 2003 and only runs in Windows. (I blame my brother for the existence of this quest.)

The problem: I only have non-Intel Macs.

The goal: Somehow obtain a computer setup that will run the game, as cheaply as possible.

Not having an Intel Mac, the only possible emulation solution was something called VirtualPC, which nobody recommends. However, Shawn Powers had an extra copy lying around, so he sent it to me in the hopes it would help. Alas, it didn't. T.T (But thank you Shawn for trying. This was a year ago and you've probably forgotten all about it by now...)

The next possible solution was to acquire the cheapest possible Windows-running machine. That plan stopped the whole quest for a while, due to the whole spending money thing. I couldn't quite justify to myself that I should spend a few hundred dollars just to play one game. But then Christmas came around again, I went back to the place that had the game, I succumbed to the temptation to play it, and thus: here we are again.

So I shopped around. And found a $200 Acer Nettop. :) In the picture below, it's the small white box between my iMac and the other monitor (also new, for another $110). 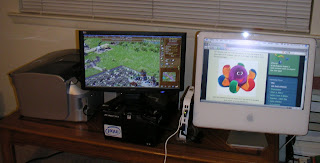 It lacks a whole lot of features that most people would want in a computer, and some friends yelled at me thoroughly about the whole plan. I should save up until I can get something better, some said. Or I should just not spend at all, said others. However, it does what I bought it for and I don't need Windows for anything else, now or in the future, so I'm quite happy with it. Plus I hoard quite well the rest of the time, and will make it just fine to my next move (either a new job or, if I still don't have one when my lease here ends, into the house of some friends who have offered to let me stay rent-free). And who knows, maybe I'll run into other Windows-only games. ;)

Seems like the perfect solution for exactly what you needed it for. Congratulations! Acer machines tend to be pretty good in my experience.

I just murder them through extreme usage, that's all.