A walk in a park

Despite having lived in Savannah for 8 years, and even though I used to drive past it every day, I'd never visited the Skidaway Island State Park until today. When I got up, though, it was sunny and warm (60s F / 18ish C). It's also right after a week of below-freezing nighttime temperatures, which means many fewer bugs. And I wanted to be outside. So ... 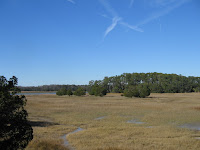 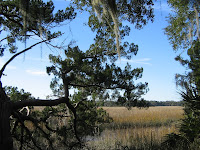 Coastal Georgia is basically all salt marshes - think of it as a "floodplain" area as the tide goes in and out. In the park, it was mostly filled with Juncus roemerianus (black needlerush). At the edge of the marsh, the treeline pretty much just starts up suddenly where the highest reaches of saltwater ends. 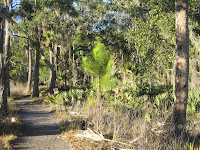 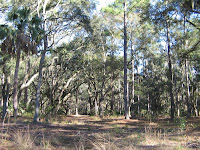 The standard southeastern maritime forest is fairly open with trees spaced far apart (that is, you can see pretty far into it and it's easy to walk through). The tallest are pines, but there's a variety of deciduous and palm-type trees in the midlevels. Saw palmettos stand out as the main part of the understory. The pines have extra-thick bark and there's lots of pine needle litter, which means fire is a part of the ecology. 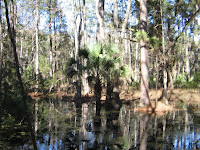 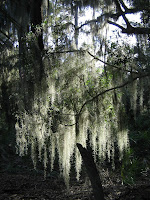 Far enough inland away from the saltwater, there are shallow freshwater ponds. Some of which are called "sloughs" (sloo). These are a type of wetland. Also, in places where spanish moss is especially thick, the distant forest can look ghostly silvered.

All in all, I walked about 7 miles and saw every part of every trail (almost... would've gotten the last bit too if my legs hadn't wore out). Skidaway Island State Park isn't that big and can easily be seen all in one day. The trails are all flat and wide (would rate "level 1 difficulty"), but then, coastal Georgia is pretty flat. And it turned out to be a good idea to wear my crocs for the venture because I had to wade through some of it (it rained a lot over the weekend).

I can't exactly say that makes me homesick (I doubt anything could), but it reminds me of growing in in North Florida. Pretty much the same biome.

And, yeah...waiting for a day without bugs there is definitely recommended.

I was hoping for no bugs, but alas, there were still a few swarms of gnats. No mosquitoes though, and as far as I can tell today, no bites by anything.

Yep, Jan-Feb is definitely the best time to go to the park here. ;) Today it's 70 degrees out and will be for the rest of the week...