It's now been almost a year since I first started seriously poking through my roomful of old boxes of stuff. A lot has gotten tossed, recycled, or shredded. The harp in one of last year's pictures has been freecycled. Boxes have been emptied, and other boxes have been filled. Stuff has moved into and out of the room from other parts of the apartment. The result so far? I think my stuff is actually multiplying. o.O 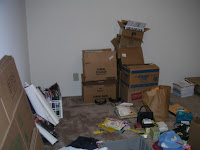 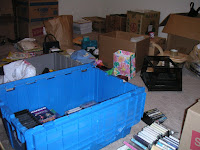 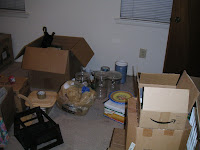 At the time I started, I figured it was finally time to unpack everything and settle in. A few months later, however, that turned out to be premature. So while I still unpacked and sorted, I'm also working on repacking it all back up again. Such is the way of my life.

Oh good lord, that's hardly a pile of boxes. Nothing to worry about -- and certainly nothing that needs an entire room. (grin)

delaning -- (1) A road construction project where they remove one of the traffic lanes; (2) the surgical removal of network cabling.

You've got nothing on my friend Susan. When we visit her apartment, our cats disappear into her room 'o boxes. The is a path to walk around the edges, while the rest of the floor is piled with boxes and such chest high.

Plus she has a very large storage space. :)

And Michael has Spock vs Q as well. :)

Actually, comparing to last year's pics, it does look better. Yay progress. :) It just takes a year to show... especially since I'm now considering unpacking and resorting some of the first boxes I'd already finished. T.T

Michelle: yes, you said that about Susan last year too.

Does Michael also have Spock v. Q: The Sequel? I didn't think it was quite as good as the first one.

If I had a blog I'd post photos of my spare bedroom. It'd scare the pants off you.

It's almost as bad as my brother's!